The economy of almost every country, be it a small or big country, has been adversely impacted by the Current Pandemic Crisis. Its effect on jobs, markets, and trade, in general, is well known and is certainly being felt to many of us right now. Amidst such uncertain and stressful times, it's natural for our mind to popup with thoughts on one’s economic survival.

Another recurring question that arises is, when and how will the economy bloom 🌼 like before. To understand that, we first need to gain an understanding of "Economy" and "How does it Work?".

What is an Economy ?

The Economy is like a collection of different sized gears ⚙️. Some are small like shops, individual businesses while others are big institutions ( corporations, governments, ... ). Every gear irrespective of its size is rotating 🌪️.

What makes a Gear rotate ?

The rotation of a gear is symbolic of an Individual’s Desire to trade X for Y 🛒. The momentum which rotates the gear, stems from the realization of an unequal distribution. The realization is itself caused by emotional states like Greed 😸, Fear 🙀, Hope 🙂 & Despair 😞.

For instance, greed gets triggered by a new shiny object ( remember that new smartphone? ), which makes one trade it for money.

How does Economy Work ?

Every rotating gear is responsible for rotating 100 more gears around it directly or indirectly. Economy is this collective rotation of gears.

In other words, the Economy is the collection of all the trades happening between individuals, businesses, corporations or any other institution.

Okay, But how did we arrive over here ?

Fear 🙀 like Greed 😺 is a powerful force and has its effect. Mass lockdowns were initiated, by the governments around the world, to stop the spread of the silent enemy. Though it was a necessary positive step, it also resulted in limiting a lot of mobility dependent businesses.

As a result, daily incomes got slashed 🔻, and fear started increasing its hold.

As pointed out earlier, every gear rotates 100 others around it. What happens when a lot of these gears stop rotating, and stops buying shiny objects 🌟, which they used to buy?

This creates a chain reaction 💥 which suddenly halts the whole economy.

Coming Back to Track :

The solution for the problem itself lies in the economy's working mechanism. To start the rotation of all gears, at least one of them has to first start by creating the momentum or desire for others to rotate.

This action of starting first is like an Investment, and is necessary for the world to be put back again, into sets of halves and halves not, of a commodity. The Investment can be of any form of time, money, energy.

Both Individuals and Institutions like Governments & Corporations can help, by infusing their capital into creations of new creators (entrepreneurs). Additionally, using their efficient networks, they can help distribute these creations to a wider audience.

For instance, as shown in the image below, early investments by Jeff Bezos into Google and Twitter, resulted in multiple investments by these companies into more startups. 🤑 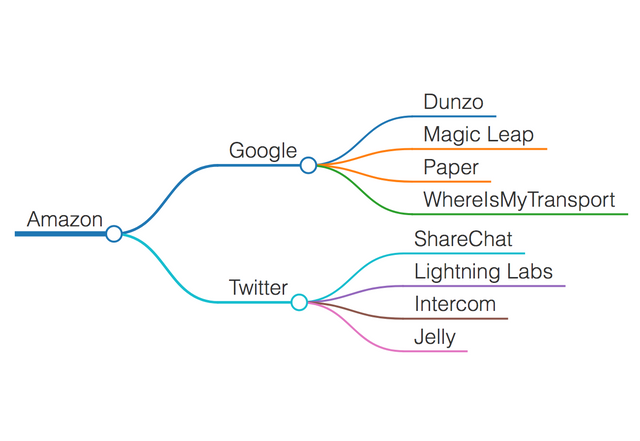 Creators can alternatively acquire capital by sales of a low priced product that is needed by a large number of people. These small micro-investments from a large crowd can become equivalent to the capital, from large investors.

The way we will be back on track will be a mix of the above two strategies.